Sooo judging by the posts on social media it’s National Donut Day. How did I not know that??! This makes me sad as I have no donuts! This leaves me with no choice but to write about them instead, so here’s my round up of donuts that I’ve tried! Is it wrong to plan a trip entirely for gluten free donuts?!

Anyone following my Instagram will know that I love Floris Foods donuts. They are the most donutty donuts that I’ve found in London with an incredible choice of jam, chocolate or custard. They’re just so damn good, how can you pick a favourite? At a push it will probably have to be the jam one, such a classic and one of my favourite treats pre Coeliac diagnosis with these being the closest I’ve found to the real thing! I do love custard though, and chocolate –  so I say try them all!! The only downside is that getting to Hackney where Broadway Market is held every Saturday is a bit of a mission for me, but so worth it when I do make the effort!

They have also recently introduced s’mores donuts which are incredible and hard to believe that they are gluten free! 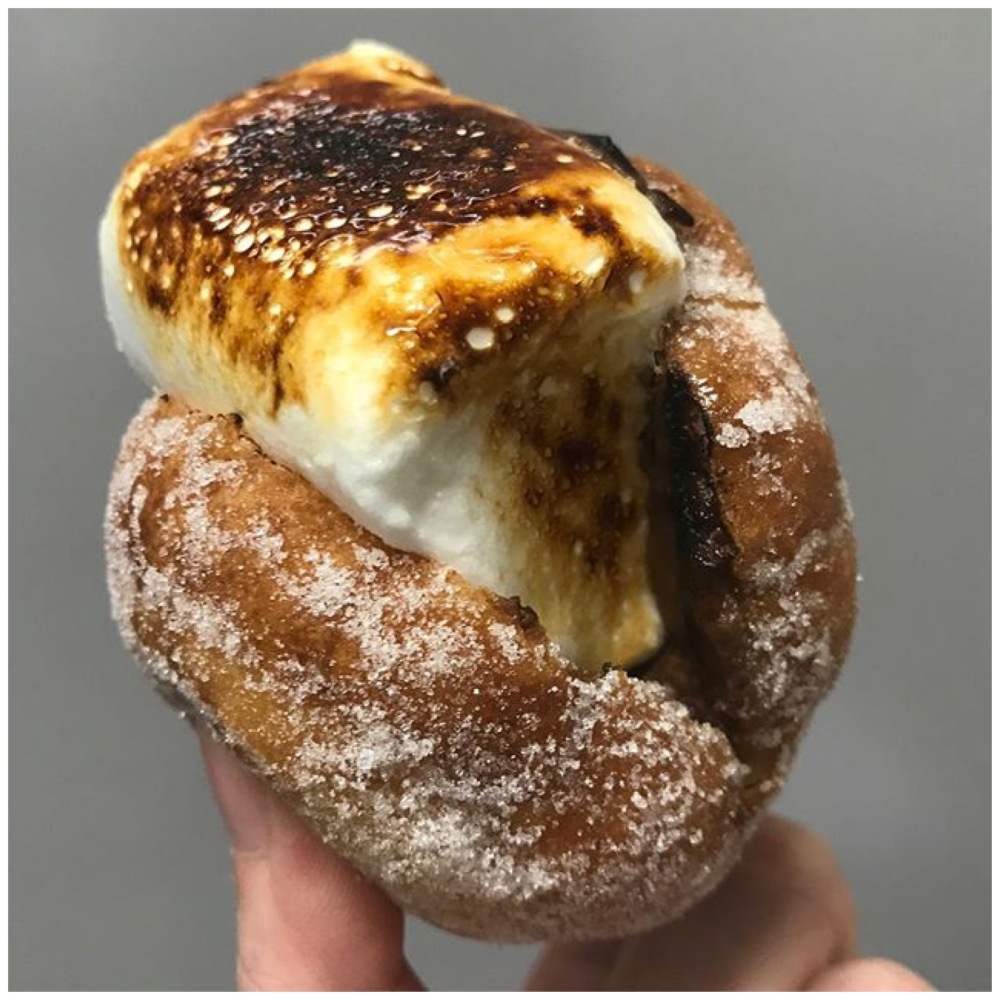 Working on Oxford Street these are my most accessible donuts, picking them up at Selfridges whenever I get a chance. They come in four flavours in Selfridges – cinnamon, sugar, vanilla glaze and raspberry glaze. These are delicious and also vegan. They are ‘cakey’ in texture so not what everyone expects them to be at first but I love them still in their own right. 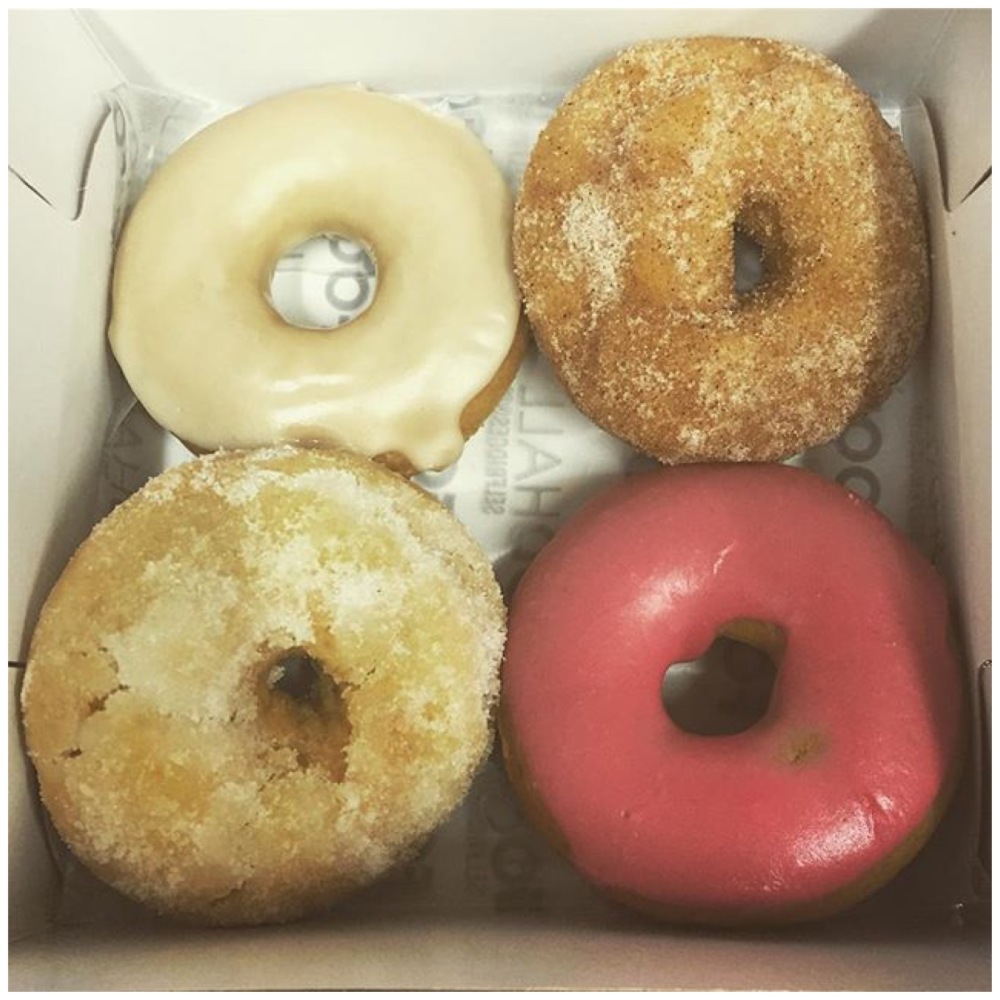 *Although Borough 22 donuts are completely gluten free, they supply them to cafes that may not keep them this way so please check for cross contamination controls when you buy some. I was recently left very disappointed at Timberyard who say that all their products – including these donuts – are not safe for coeliacs as they use the same utensils and storage areas for all their cakes. How incredibly disappointing that these beautiful donuts are not kept safe for coeliacs!

Like Borough 22 Ruby’s of London donuts have a cake like texture and are also vegan. I’ve only tried them once as Greenwich is a bit far for me to get to regularly but I loved the ones that I tried! These were the cinnamon and the sweet raspberry white chocolate. 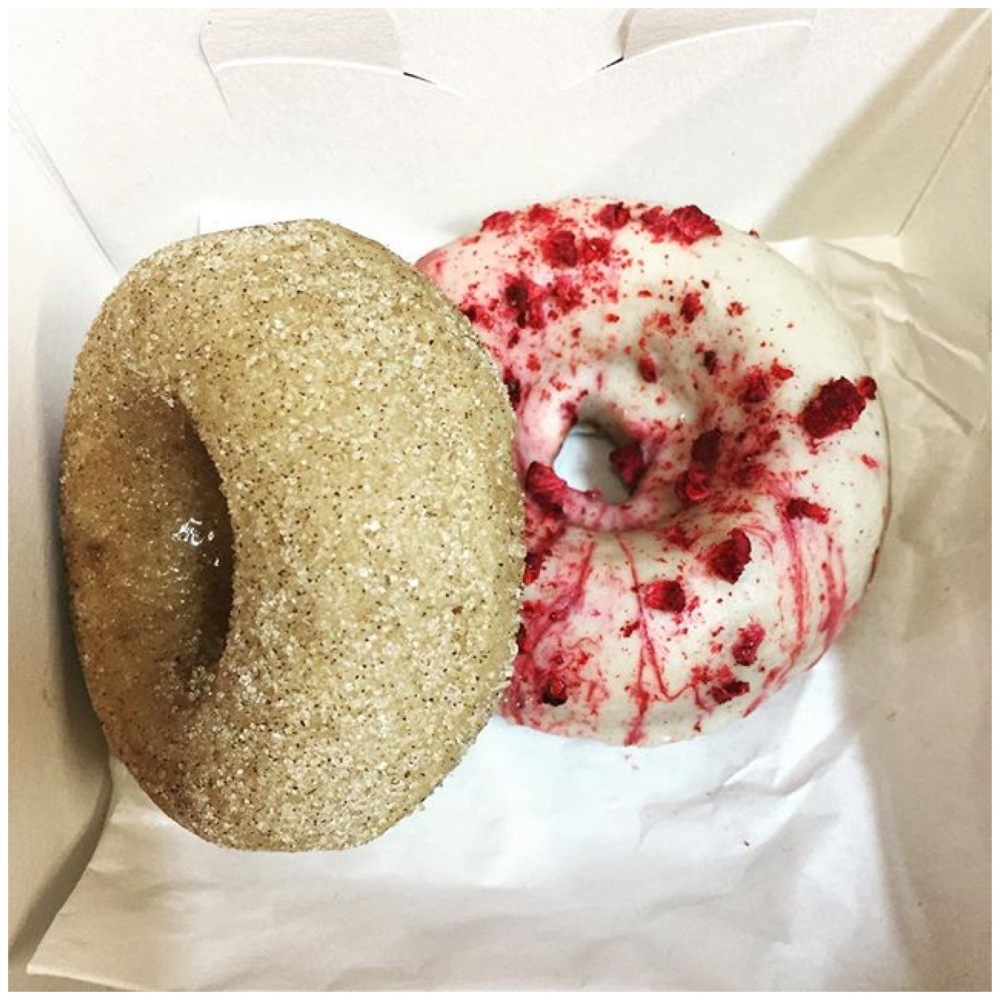 Since writing this original blog post, Rubys donuts have started being stocked at Leon restaurants. Cue some confusion as they are labelled as wheat free and vegan but not gluten free. After calling Ruby’s directly they said that they are their gluten free donuts but as they are made in their facility which isn’t completely gluten free they don’t label them as gluten free in Leon. I ate mine having eaten them before and knowing they take measures to control cross contamination but it is your choice to decide what is right for you. Soon they are moving to gluten free premises and will not have an issue with labelling them gluten free!

My sweet tooth and I are obsessed with Cookies and Scream and everything it sells. With it all being gluten free, vegan and delicious what’s not to love? Their donuts come in many different flavours depending on the day and can be served as an epic donut icecream sandwich. AMAZING!

Sevenoaks, Kent and every Saturday at Broadway Market, London 9-5.

Eat ‘n’ Mess have started doing baked donuts using Gluten Free Alice’s recipe and what glorious donuts they are. Flavours change often but I would highly recommend them all, and trying as much as you can whilst you’re there as Eat ‘n’ Mess is amazing!

Tesco have recently launched frozen donuts. I was a little sceptical about how good these would be but I think these sugar rings are the closest thing I’ve had since diagnosis to the sugar donuts that you get a fun fairs, they were so good! I enjoyed them plain, topped with cinnamon and topped with sweet freedom chocolate. I need to get another pack and heat them up as then I think they’ll be totally amazing! Well done Tesco. Asda have also launched similar donuts but I’m yet to try them!

I bought these donuts in Tesco and I was so excited to try them. However, I didn’t like the texture and didn’t think I’d buy them again. However I’ve seen social media posts from others since who have heated them up first in the microwave so maybe they’re worth another chance!

Edit – August 2020 – I don’t believe these are available anymore. 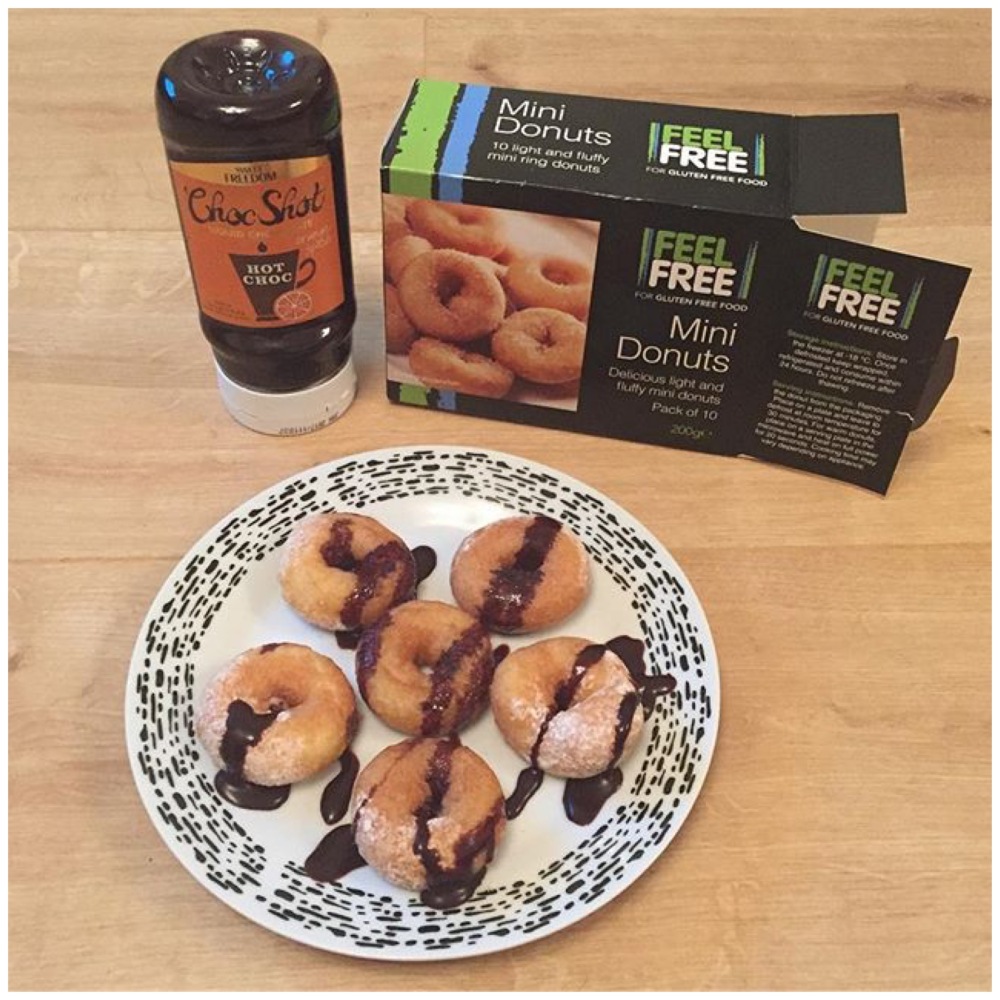 Sugar Daddy’s is the amazing gluten free bakery full of sweet treats that is an absolute must visit on a trip to Edinburgh. Go first thing and scoff these beautiful sugar donuts freshly baked – amazing!!

Rome was so incredible for gluten free food, including eating all the fried food at Mama Eats such as these insane fried donuts topped with sugar and chocolate. Who knew when I was diagnosed ten years ago that I would ever be able to eat food like this again!

It’s hard to describe just how good the gluten free scene is for coeliacs in Rome, but on this trip I managed to find donuts in two 100% gluten free establishments! These custard donuts were nice (I love custard) but perhaps a little dry in texture  – worth the buy on a trip to Rome as the bakery is near to the Pantheon so not out the way for seeing the main sights, but not my favourite of all the donuts I’ve tried.

Unfortunately for me the most incredible donuts I’ve ever tried gluten free were found in Chicago. They were normal sized donuts, not miniatures and they still tasted like normal donuts. I still dream about the lemon pistachio donut and debate about returning to Chicago just to eat these. Anyone visiting America that has a chance to go to Chicago must not miss these!!

I have to say I was skeptical about trying the donuts at Glenn Wayne Bakery as it is a normal bakery and somewhere I wouldn’t normally eat from. It also isn’t instantly clear from their website that they have gluten free options that are safe. I then found the information page that shows one of the owners daughters has coeliac so they have a dedicated gluten free room inside the bakery that is locked. Access is only granted once employees have washed their hands and changed their aprons. They still state that the donuts aren’t made in a dedicated gluten free facility as they have to be wheeled through the normal bakery to the shop, but I decided to give them a go – and look how beautiful they are!

Travelling from Clearwater Beach to Orlando gave me the opportunity to stop at Hale Life Bakery to pick up some of their amazing gluten free and vegan donuts. Well worth the stop off for anyone in Florida! I enjoyed mine at a day at Busch Gardens as an added bonus to my day at the theme park!

Gluten free and vegan donuts (and plenty of other sweet treats) are a must whenever I’m in Orlando! In the photo are the cinnamon sugar and cookies and cream donuts that kept me going on a flight from Orlando to Washington DC! Definitely recommend a trip to Erin McKennas if you’re ever in these locations.

When I was first diagnosed as Coeliac I used online companies more than I need to now due to working in London and having great access to gluten free food as well as the supermarkets continuing to improve their ranges. However as I was missing donuts I decided to place an order and some incredible donuts turned up! Caramel iced rings, classic jam donuts and custard filled donuts mean that if you’re missing donuts (or eclairs, choux pastry or tiger bread) then consider placing an order! 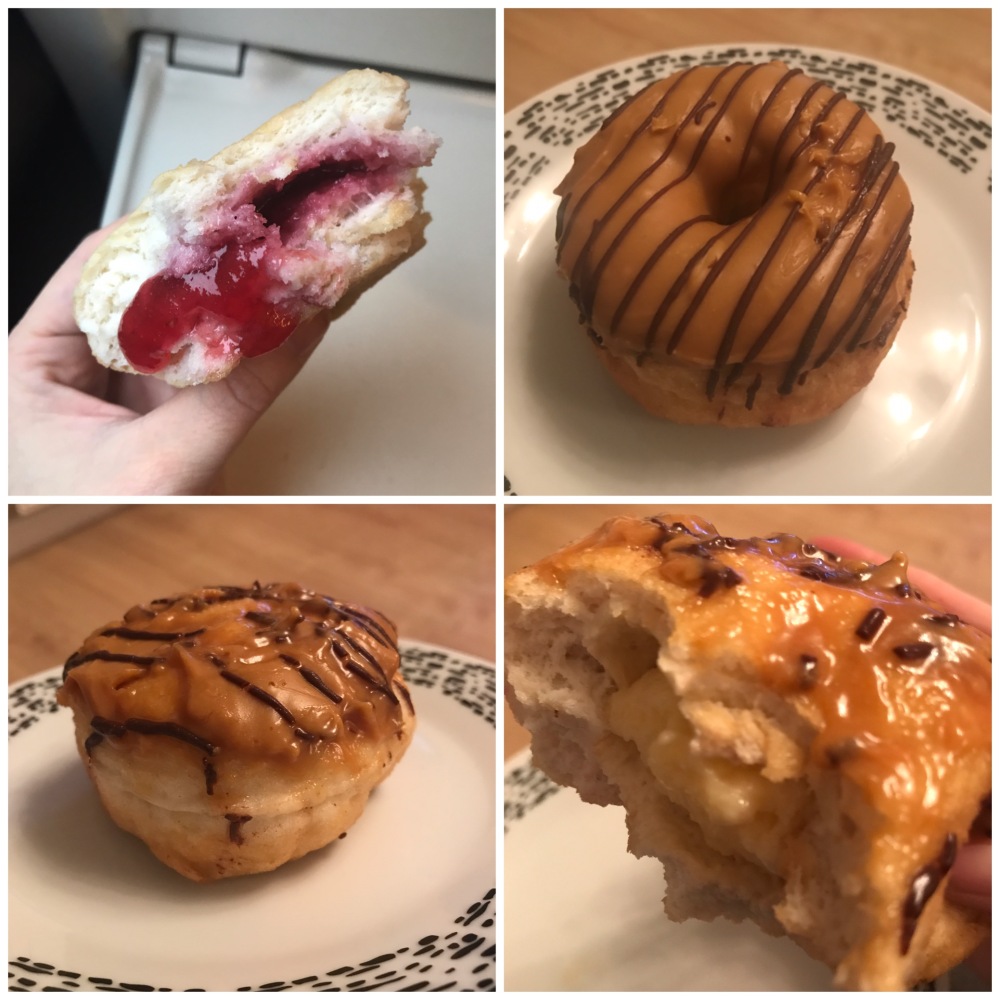 If all else fails you could always have a go at making them yourself! I bought a donut tray off of Amazon myself to be able to give them a try with Isabel’s gluten free baked donut mix and I would highly recommend as a quick option. I made mine into Cookie Monster donuts for a party and they were a huge hit!

What other donuts have you tried? What are your favourites? Comment below and I’ll give them a try as I just love them! On my personal must visit for donuts list are:

* The Rock Shop (Skegness) – actual fried donuts on the beach, what a dream!