Last year Paul and I decided to go on an Alaskan cruise with friends. To turn it into a two week holiday we decided to add on time in Seattle, and two nights in  Portland – a city that is meant to be heaven for gluten free options! I couldn’t wait to do all the eating and had no idea what I was going to cram into the two days!  Now a year on, I figured I really should get around to writing up my travels to Portland and Alaska, so here’s my guide to a weekend in Portland!

Paul and I picked the Dossier hotel, a five star comfortable hotel in Portland and thoroughly enjoyed our stay. We didn’t eat at the hotel, but it was very conveniently located a few minutes walk from Petunias bakery!

After arriving into Portland from Seattle by train I was incredibly hungry. After checking into our hotel I headed straight out to Petunia’s – a gluten free and vegan bakery that is literally heaven. In the end I opted for a box of comfort food – Mac ‘n’ cheese (I’m sure there is a rule that I have to order this if I see it anywhere gluten free!) along with a cupcake and cookie sandwich. Everything was incredible and hard to believe that it was all vegan too. 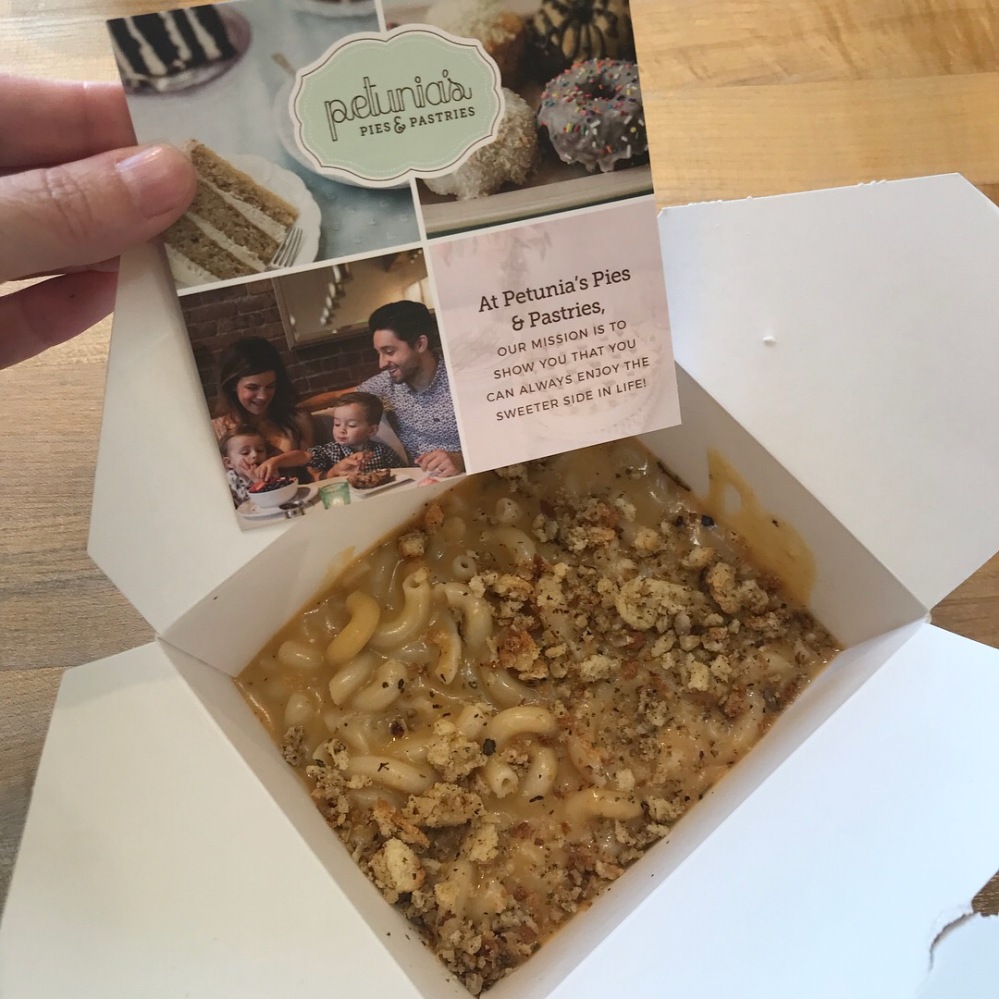 The next day we tried to eat at all the food trucks but it didn’t end well. I found gluten free options (think fish and chips and grilled cheese sandwiches) but none of them in my opinion were coeliac safe. As we were getting hungry I said for Paul to pick something and I would just get something again from Petunias and eat at the hotel. Sometimes it all gets a bit much searching for safe options when you’re hungry! Note – Portland had loads of options, we just really wanted to eat some of the street food and keep it casual for lunch. 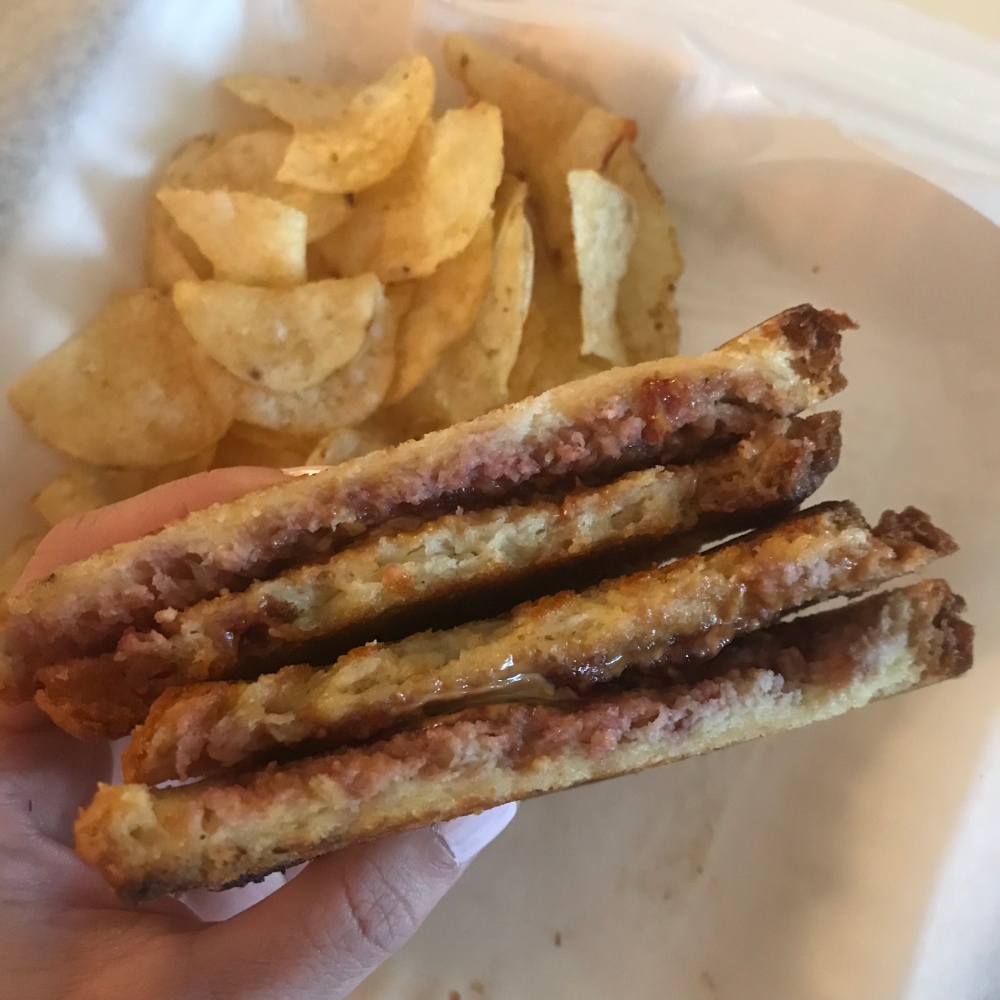 Either way, I ended up with a peanut butter and jelly toastie with chips (ie crisps!) and a slice of cheesecake to share with Paul. I absolutely loved everything that I bought from this bakery and 100% recommend it.

As four time winners of cupcake wars, Kyra’s Bake Shop was somewhere I really wanted to visit, so we took the bus there from Central Portland (how did we cope before googlemaps?!)

I arrived too late in the day to get my hands on any of the donuts, so I sat in the restaurant and ate the hot chocolate cupcake that was topped with marshmallow and was gluten and dairy free – it was amazing! 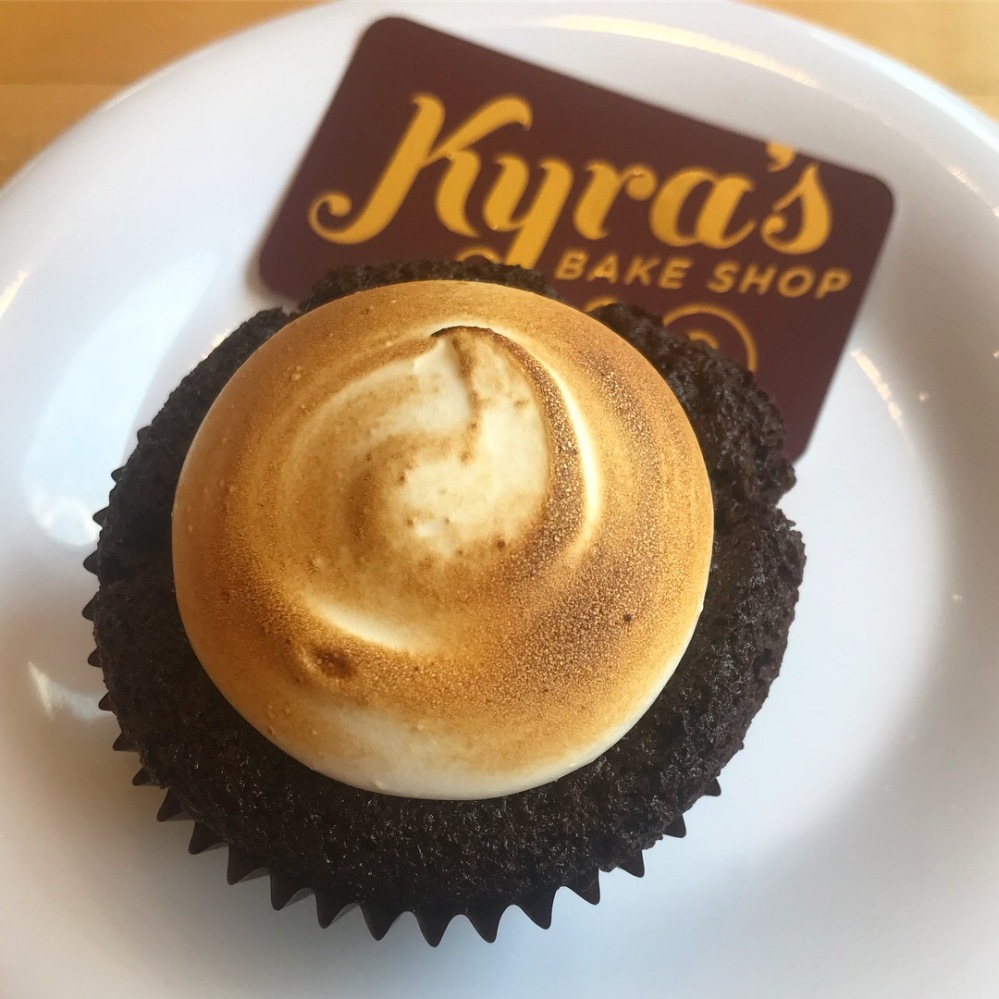 We also bought the blackberry crumb muffin that was gluten and dairy free; an Oregon bounty cupcake (cinnamon cupcake with Marionberry jam and topped with hazelnut buttercream) and the carrot cupcake to take away – it was fortunate we did so as that night our plane to Anchorage was delayed, so we passed the time in the airport eating cupcakes! (Sorry for the poor photos, the cakes turned upside down enroute to the airport!)

Alongside all the cake options I ordered an epic cinnamon roll, one that I was very grateful for when I woke up in Anchorage hungry the next day! 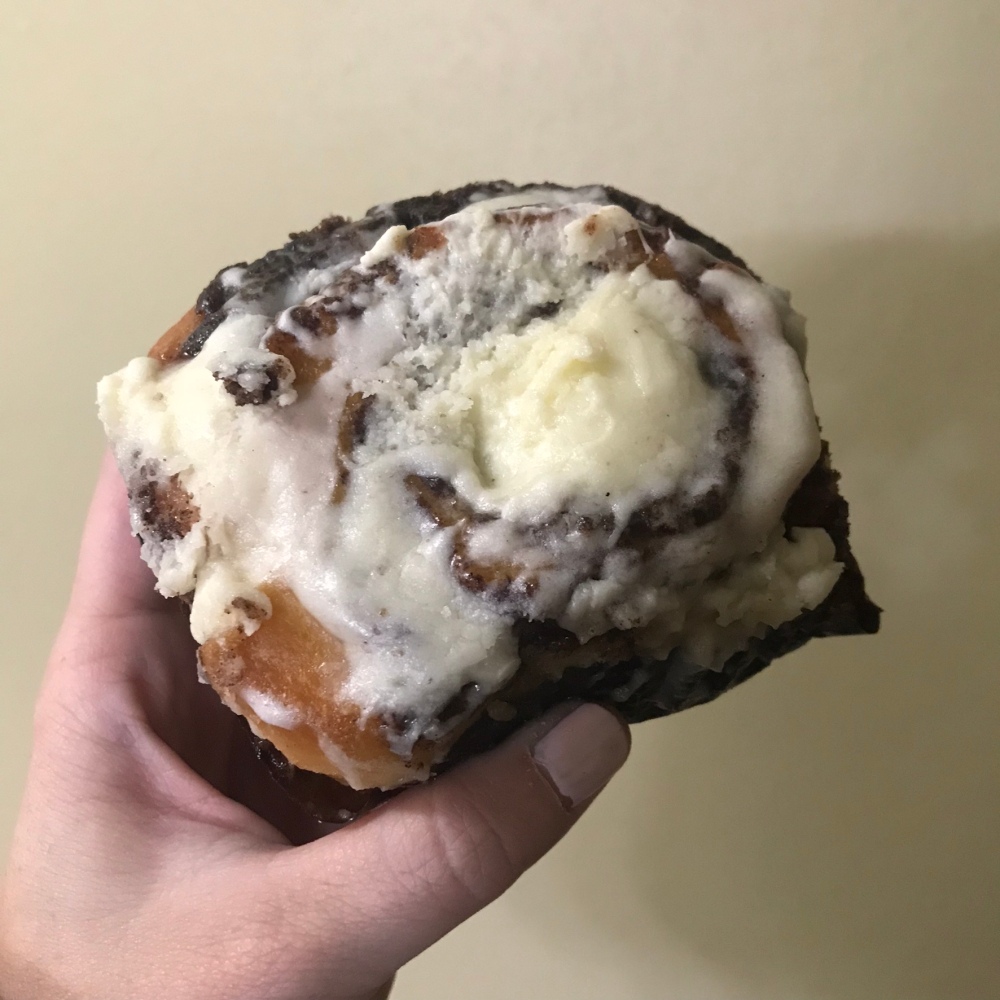 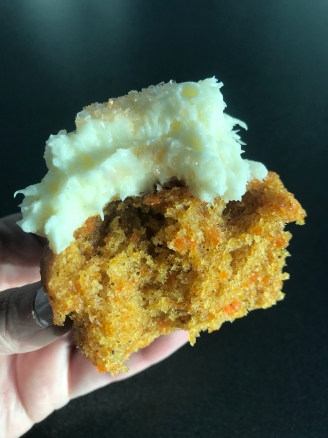 We had breakfast on one of the days at Kure – we must have been trying to counter act all the gluten free bakeries with an açai bowl. I had a small bowl of the gods without banana – peanut butter, açai, gluten free granola, strawberries, vanilla plant protein, almond milk, almonds, goji berries, coconut flakes, maple syrup and cinnamon crammed into one tasty bowl! 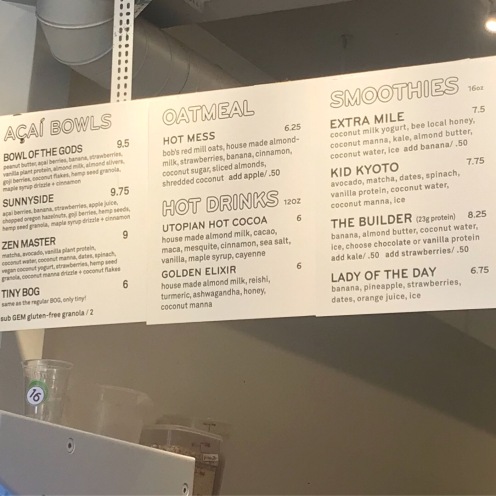 A 100% gluten free Mexican restaurant that is on the healthier side of Mexican cuisine, with a menu featuring vegan and paleo options. There are a few branches serving delicious food alongside banging margaritas. 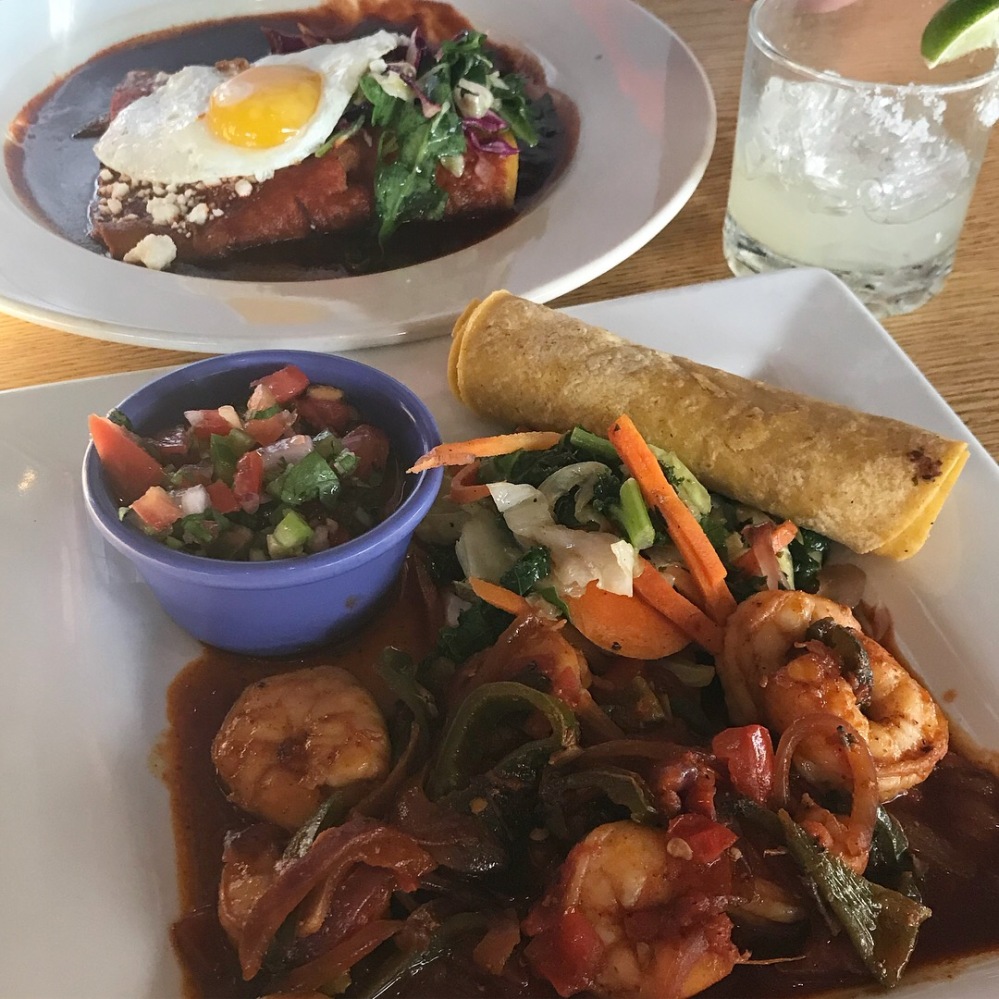 We loved our meal here and it’s the type of 100% gluten free restaurant that Paul also enjoys – it is about tasty naturally gluten free food rather than a restaurant menu full of gluten free alternatives. We would definitely return here on a trip to Portland.

Famous for its incredible looking chicken wings that sadly aren’t gluten free we visited Pok Pok for dinner as we love Thai food. They aren’t a dedicated restaurant so do be careful if you choose to eat here but they had an allergen guide and the staff that served me were clued up.

There weren’t that many gluten free choices, and the food not very pretty but I choose the the Khao Soi Kai dish. From the restaurant menu it is described as a
‘Northern Thai mild curry noodle soup made with our secret curry paste recipe and house-pressed fresh coconut milk. Served with house pickled mustard greens, shallots, crispy yellow noodles and roasted chili paste. Typically served as a one dish meal. Chiang Mai specialty with Chinese Muslim and/or Burmese origins, depending on who you talk to.’

I think my noodles were substituted to make it gluten free and it was so delicious! 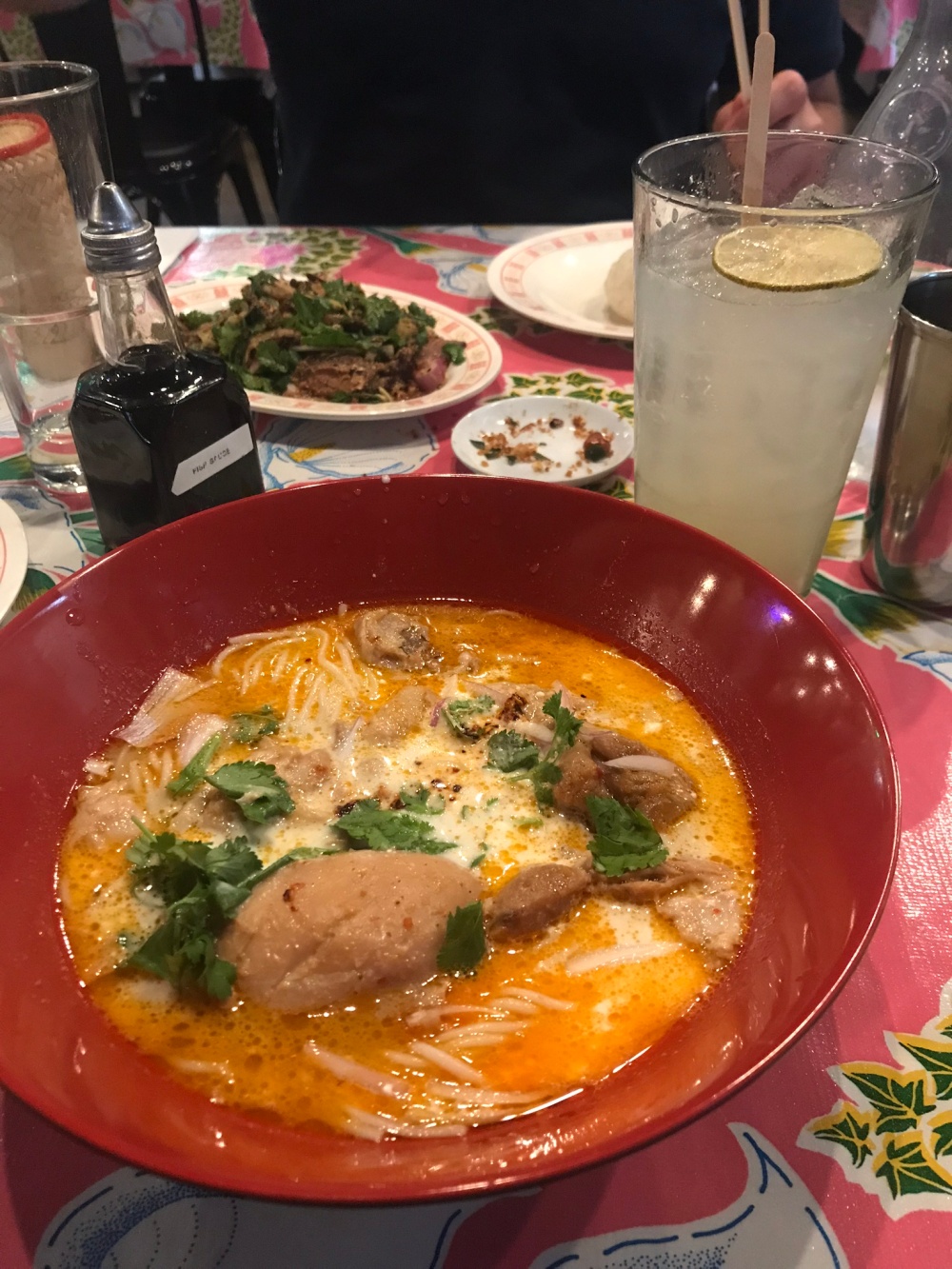 We really wanted the mango sticky rice for dessert but they had run out, so we got the Sangkhaya Thurian instead – a sweet sticky rice with coconut/palm sugar custard flavoured with durian.

Other Recommendations that I didn’t get to try

*New Cascadia bakery – 100% GF that I really wanted to go to for bread and bagels.

*Andina – highly recommended for incredible Peruvian food but will need a reservation.

*Salt and Straw – famous for ice cream and I was recommended the salted caramel flavour. A chain that also seems to have branches in California.

*Ruby Jewel – icecream sandwiches from a mixed facility that I was told takes care with cross contamination.

I was given so many recommendations when researching places to go in Portland  – but these were the most frequently or highly praised eateries that I thought I would share with you! I didn’t go to any of them though so please do check for cross contamination procedures first! 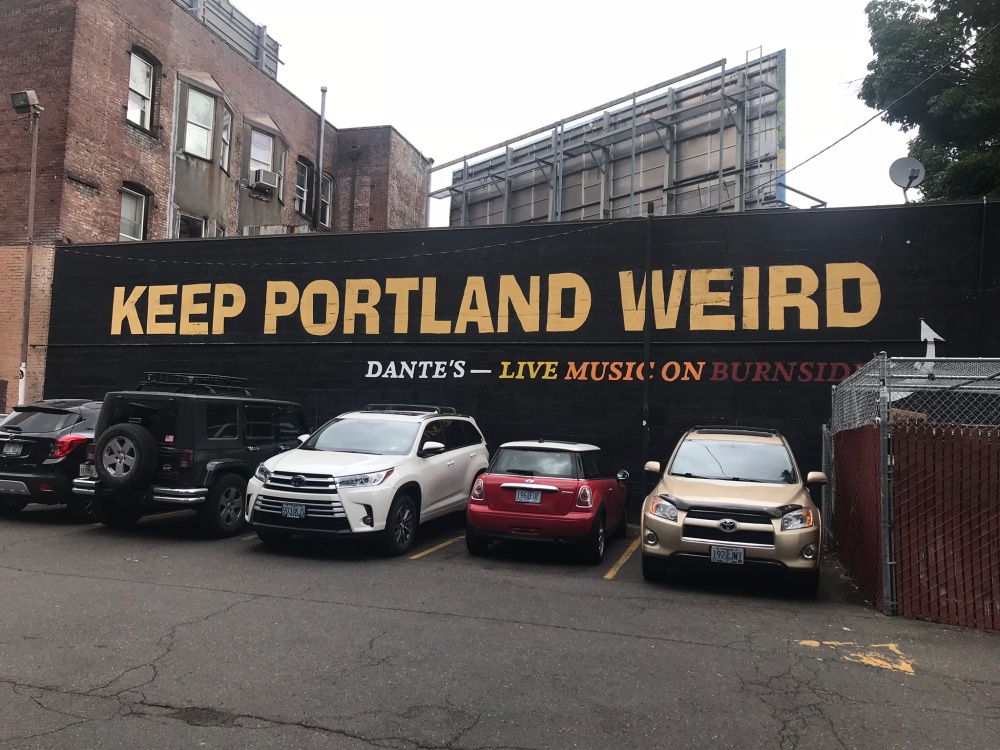 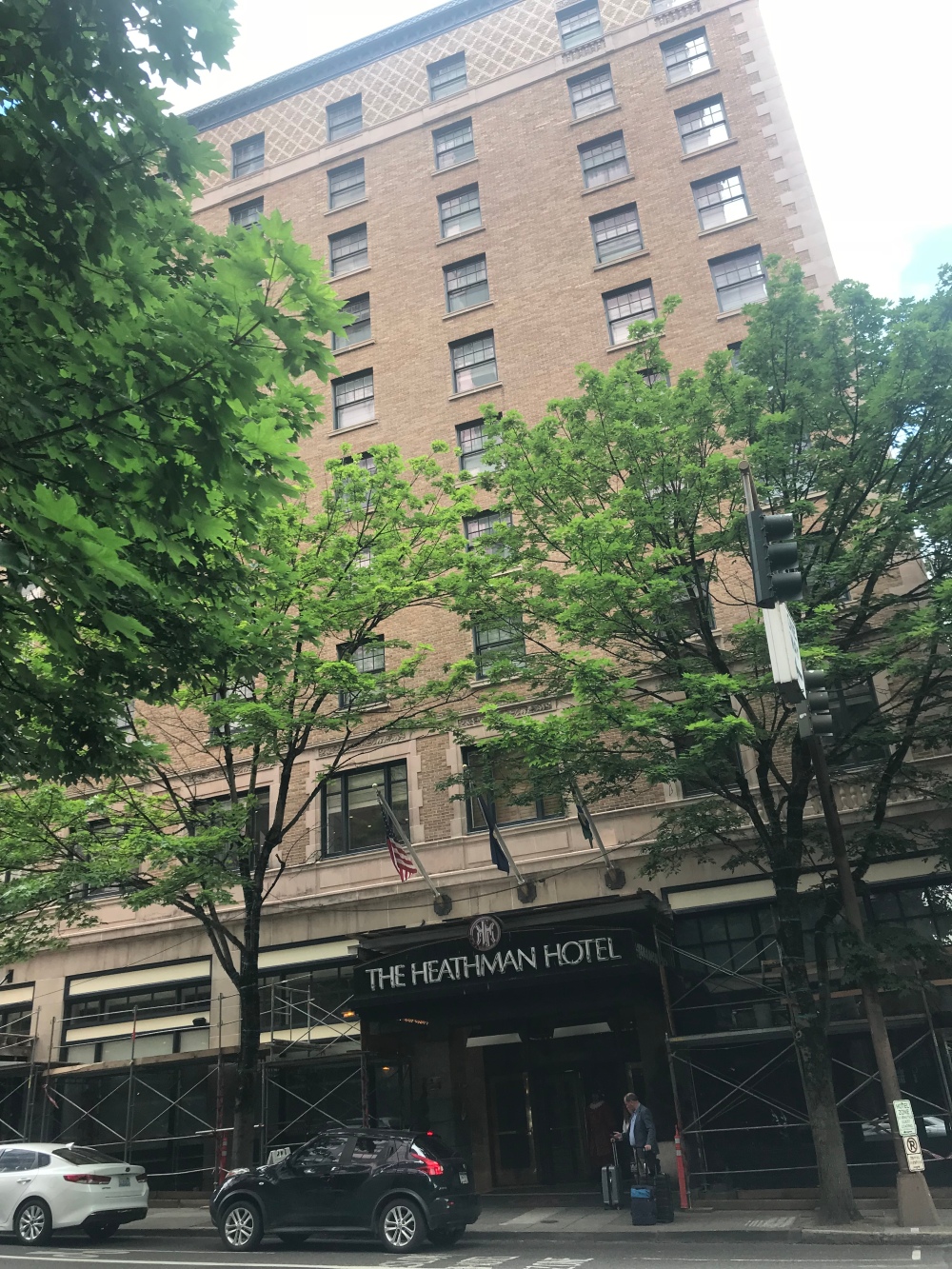 I highly recommend a visit here in the summer when the flowers are in full bloom, it was absolutely beautiful! 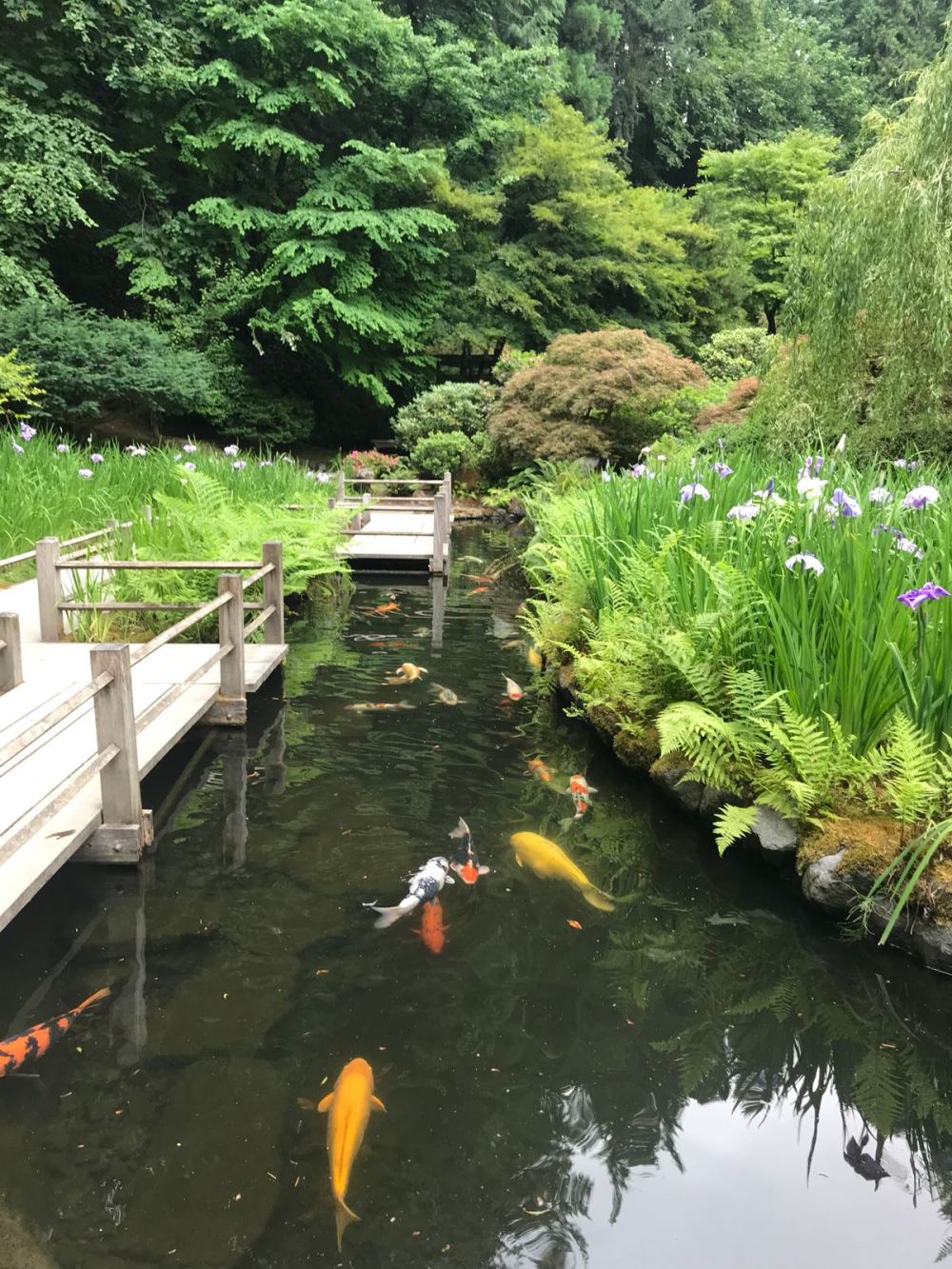 For our full day in Portland we ventured out of the city for the morning to see a bit more of Oregon. The tour included Columbia River Gorge, Latourell Falls, Multnomah Falls (featured in the film Twilight),  Bonville Dam and Dam Fish Hatchery. We went on the tour for the scenery and to get further afield than the city having spent several days in Seattle and Portland.

As it was a half day trip we were due to have lunch back in Portland. Due to this I just bought a marshmallow dream bar from Starbucks for a coach snack! I love these bars and try to always have one at some point on a trip to the US, and love that they can be picked up pretty easily as they have been stocked in Starbucks pretty much everywhere that I’ve tried in the States.

We had a fabulous couple of days in Portland, you could spend a lot longer here eating and drinking your way around this hipster US city! I wish we’d had more time here to do exactly that!