Skip to content
Posted on October 1, 2018August 19, 2020 by thesightseeingcoeliac

I have always dreamt about going to Chile and Patagonia, I have no idea why Santiago was at the top of my bucket list but when I had a sabbatical at the beginning of the year I knew Santiago had to be included and we made it the first stop on our five week trip!

We booked into the Crowne Plaza and were very glad we did when we had arrived into Santiago after a long haul flight, taking us from the cold and grey January temperatures of the U.K. to the blazing blue skies of South America. This hotel had an outdoor pool and was our first stop after checking in, where we sat in the sunshine with our five week trip ahead of us thinking about how we were living our best life! Not many hotels I looked at seemed to have an outdoor pool which was one of our must haves (and top tips) for a hotel on a city break in the height of summer! 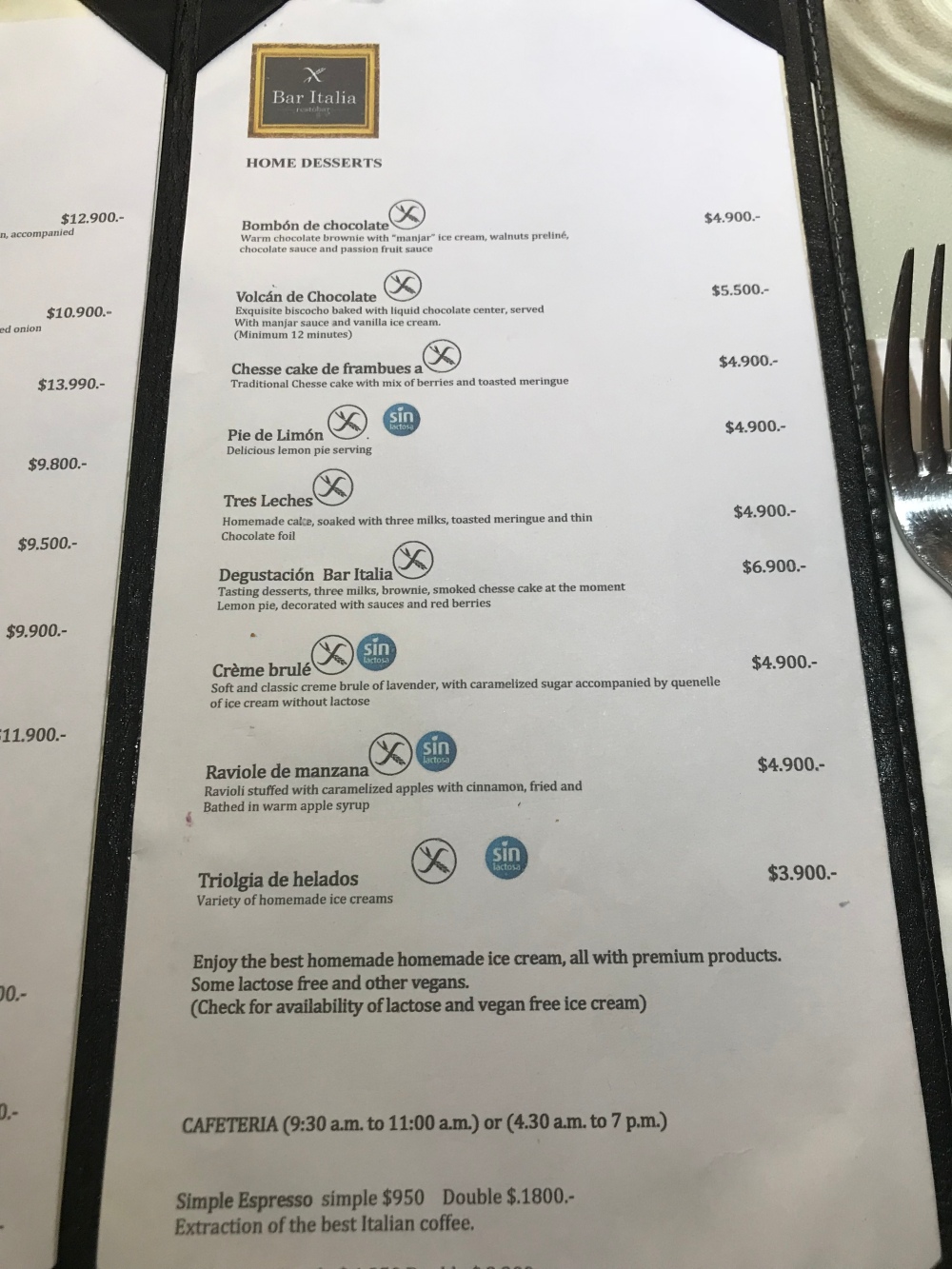 Barrio Italia was such a cool neighbourhood as our first impression of Santiago as we walked to Bar Italia. When your first gluten free stop in Santiago gives you four cheese stuffed pasta with mushroom cream and truffle oil you know you’re in for a good time! It was pretty rich and cooked a little too al dente for my liking but I still loved every bite! It was incredible all washed down with a glass of local white wine. The whole restaurant is gluten free with lactose free and vegan options also marked on the English menu so it’s perfect to fill up after the flight.

I also knew that I had to order dessert and I ended up with what is the most epic gluten free dessert I have ever been served that included lemon meringue pie, cheesecake, brownie and Manjar icecream and a milk cake. I had assumed the dessert was kind of like a tasting plate with a small bite of everything, in reality it was more of a sharing platter with pretty big bites of everything! I certainly overindulged on my first meal in Santiago and had to be rolled out of the restaurant, full but blissfully happy! 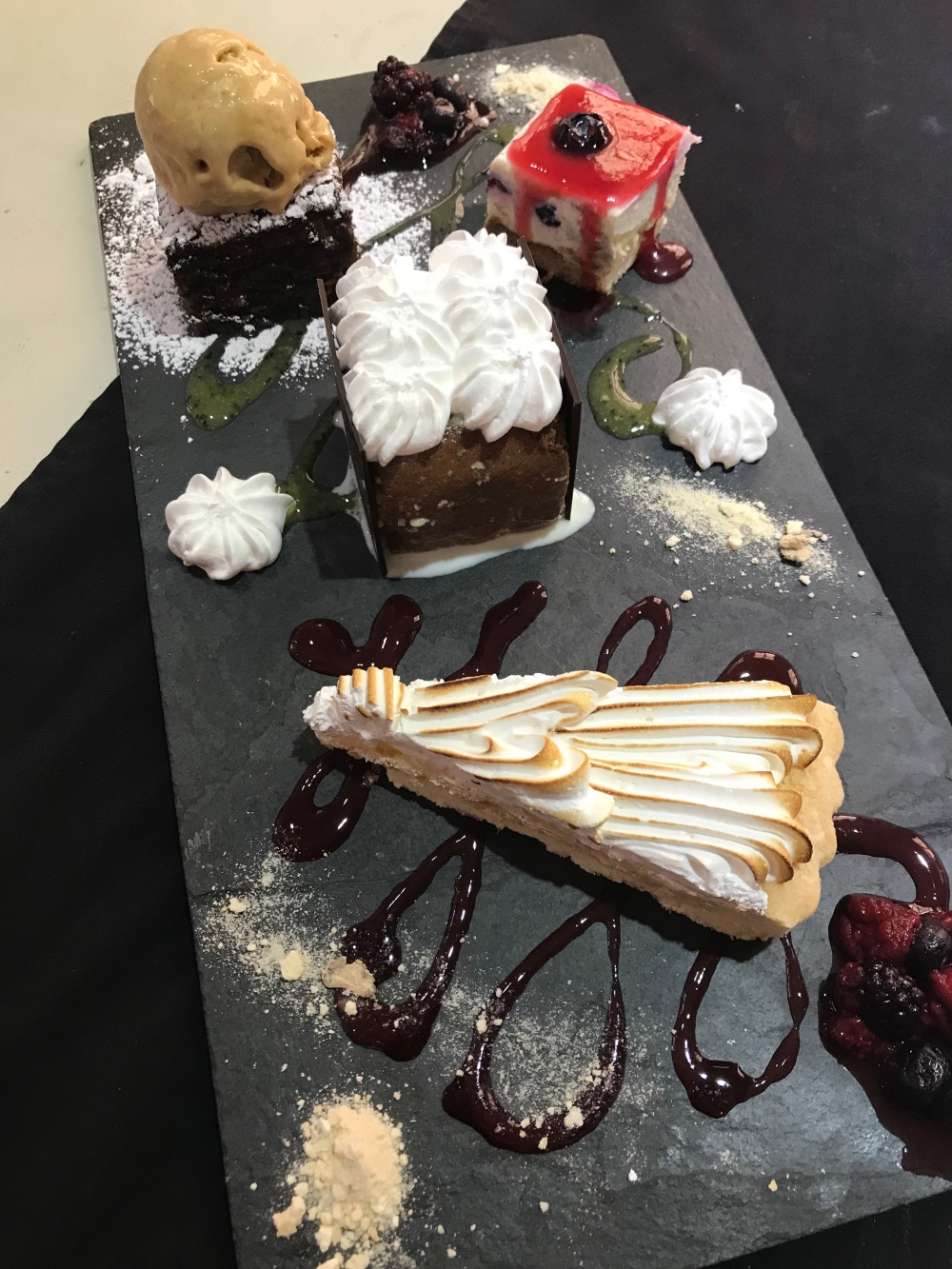 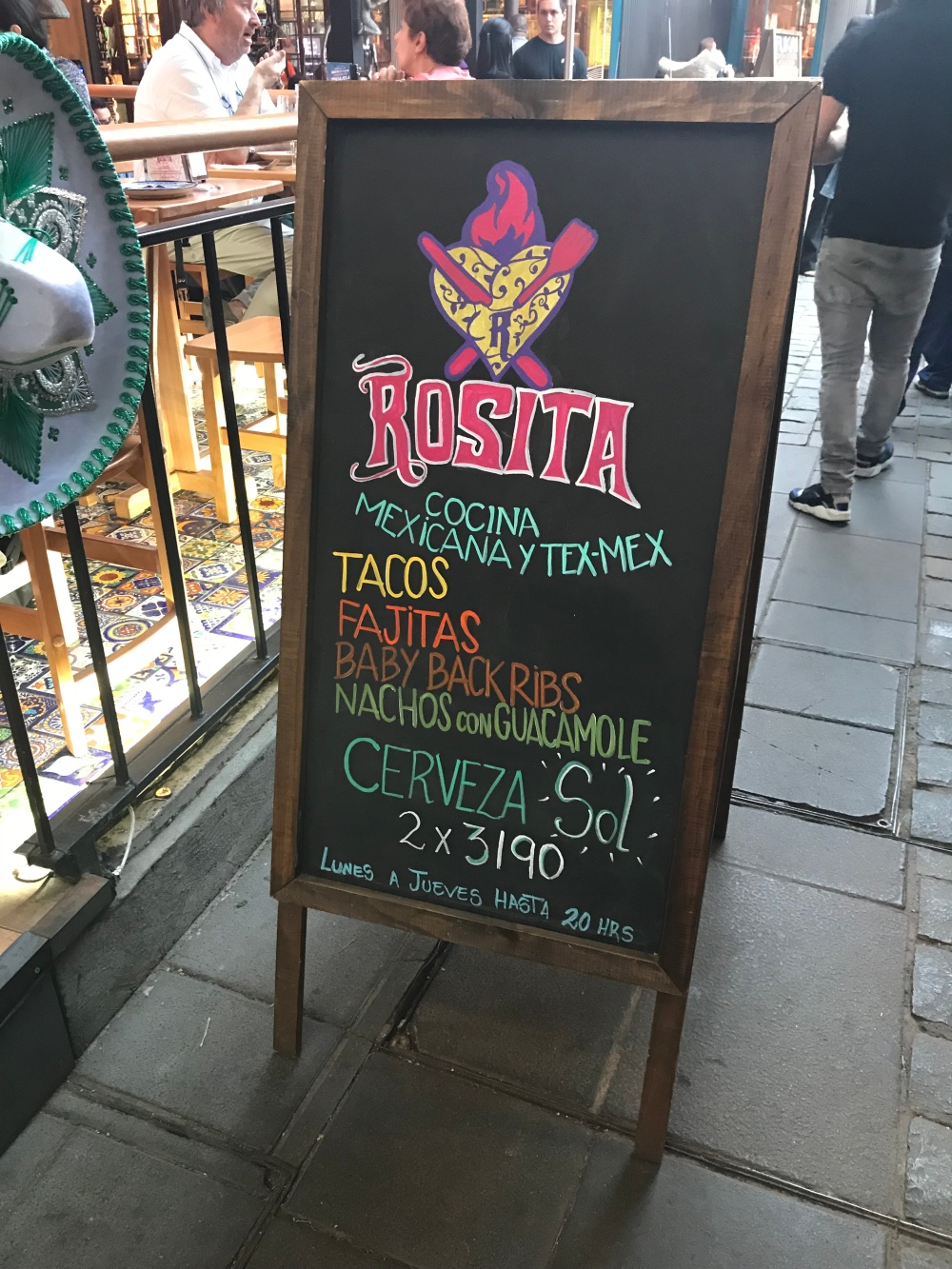 Tacos have become one of the easiest things to get gluten free without any stress whilst eating out if you can find them made from corn, and they’re so tasty especially when washed down with a margarita or two! There was such a fun atmosphere and great food at Rosita with guacamole followed by steak and cheese tacos. The staff used my translation card and took the time to help work out what I could have and it made for a fun stress free evening out!

They were a busy restaurant with live entertainment and we had an absolute blast eating here. 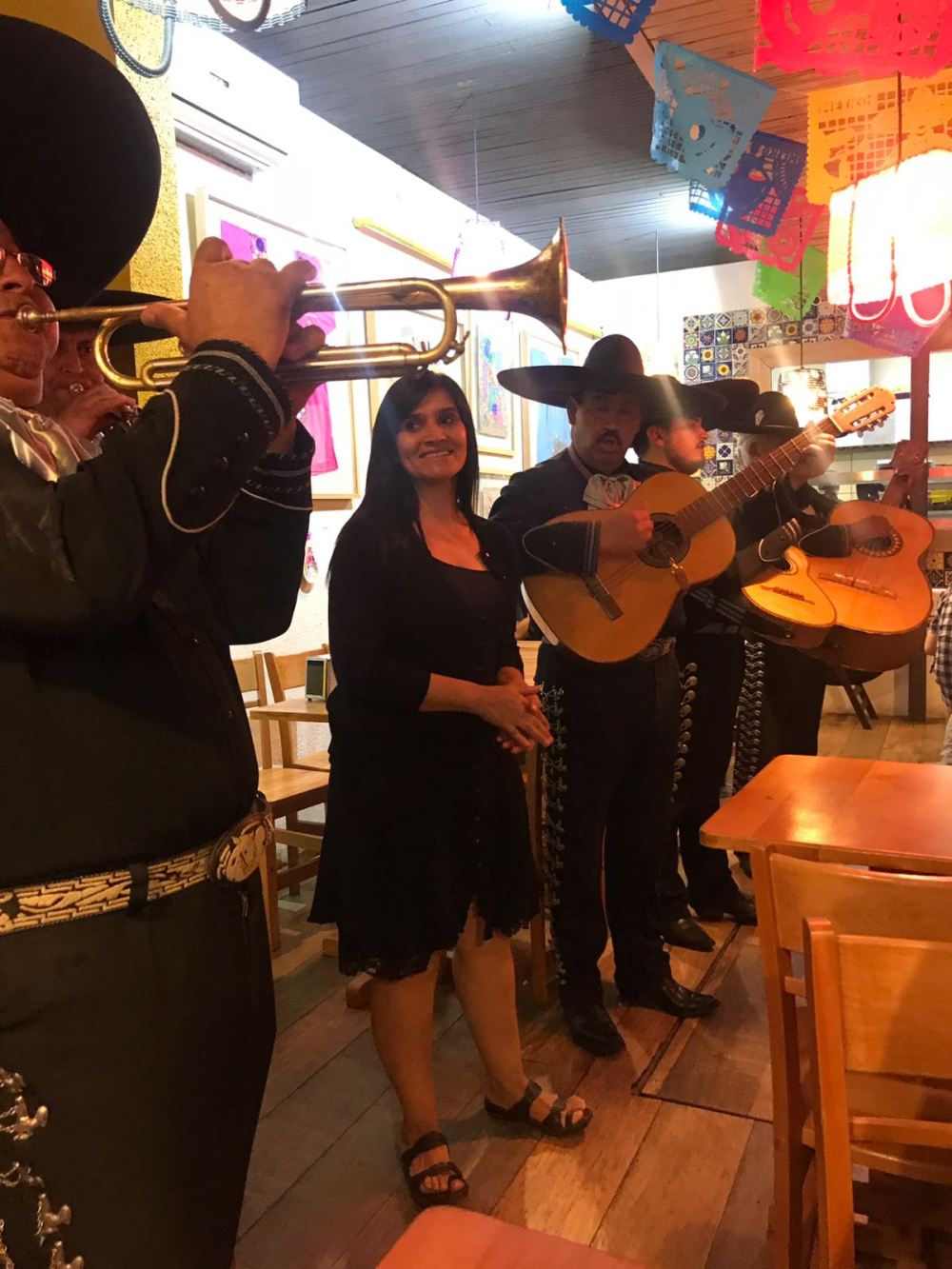 We had a somewhat eventful afternoon sightseeing when we went on the red sightseeing bus tour, as the bus crashed into a car (a reminder of why you should wear the provided seatbelts!) Fortunately it was nothing too serious as we weren’t travelling that fast at the time but we ended up getting off the bus near a big shopping centre and restaurant area and made the most of the detour with a lunch stop at PF Chang’s. If you aren’t aware, PF Chang’s is a Chinese that is a US chain that I have eaten at several times that has a gluten free menu and I love it there! They had the gluten free items marked here in Santiago too and I used the Spanish translation card to try and help clarify what I needed as I wasn’t sure they would have the same protocols as the US branches.

Recommended in the Lonely Planet guide and on http://www.santiagotourist.com we decided to try out Galindo, a popular restaurant with the locals that seemed to serve traditional South American food. Gluten free items were not marked and it was not a restaurant particularly geared up to tourists but the food was pretty basic – meat with chips or mash! I stuck with the mash even though I had the Spanish translation card it was just less hassle than trying to check if the chips were fried safely. I had a huge pork chop and mash whilst Paul had steak and chips.  The meals were washed down with a pisco sour (has to be done whilst in Chile!) and Paul had a beer and we enjoyed the atmosphere of the restaurant. However, do make sure you learn the phrases in Spanish for how you like your steak cooked (and probably order it less cooked than you normally would) as many of Paul’s steaks in South America came well done which didn’t impress him too much when he wanted it medium rare! 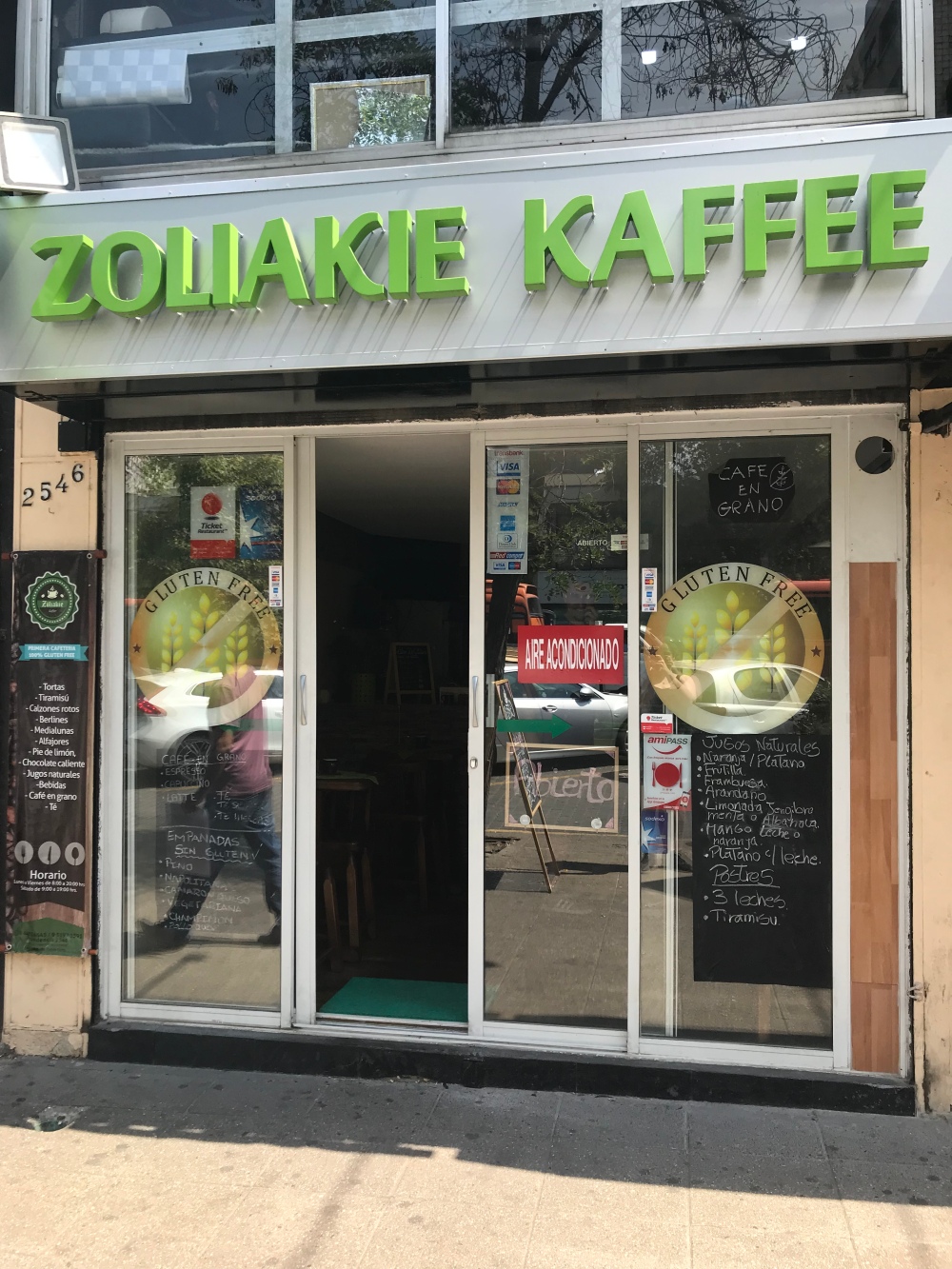 I managed to get my hands on gluten free  empanadas whilst in Santiago thanks to a @glutenfreetravellife recommendation on instagram. Kiley gave me lots of tips for Chile that I was really grateful for and this tip meant I was not quite so jealous of Paul being able to eat empanadas from the street stalls! It was a bit tricky to photograph in the blazing sunshine but they made me very happy and worth seeking out. The cafe was located fairly near the Costanera Center so worth the stop off when you visit there! 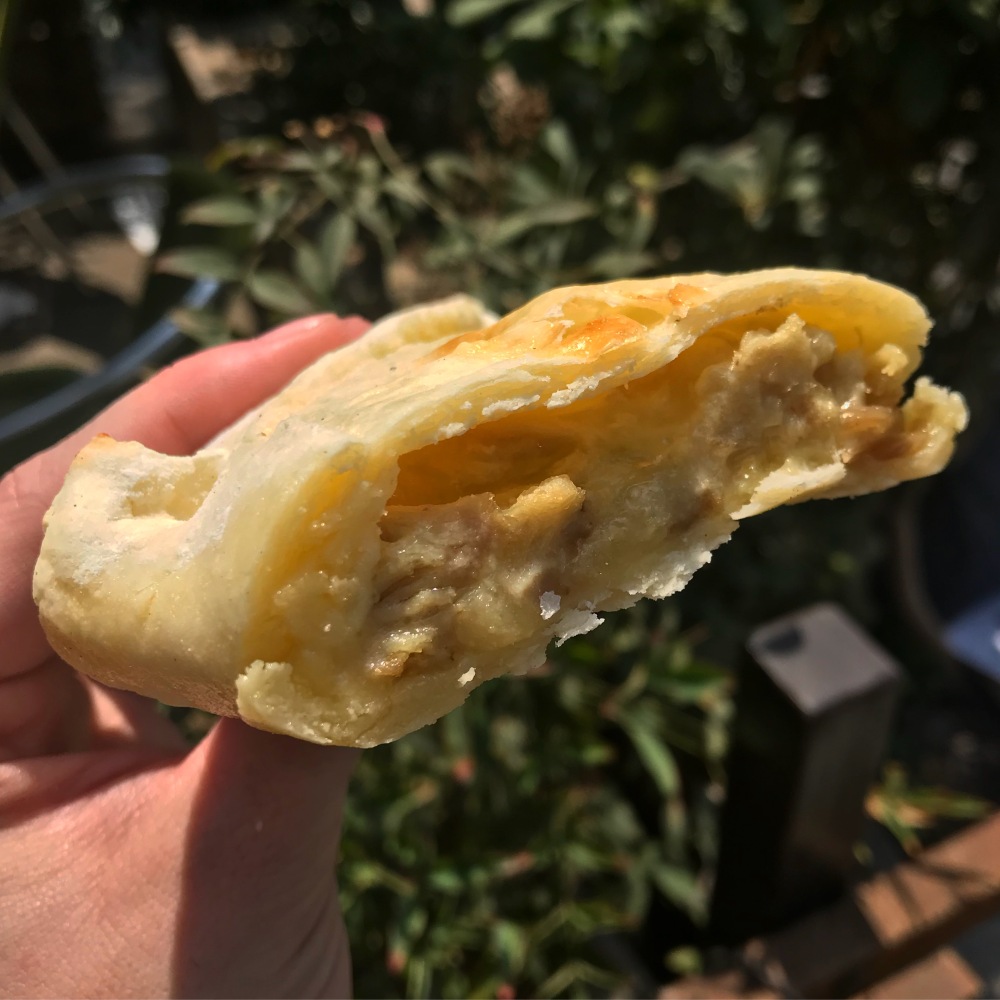 I also bought some other treats to takeaway with me that included biscuits and profiteroles. 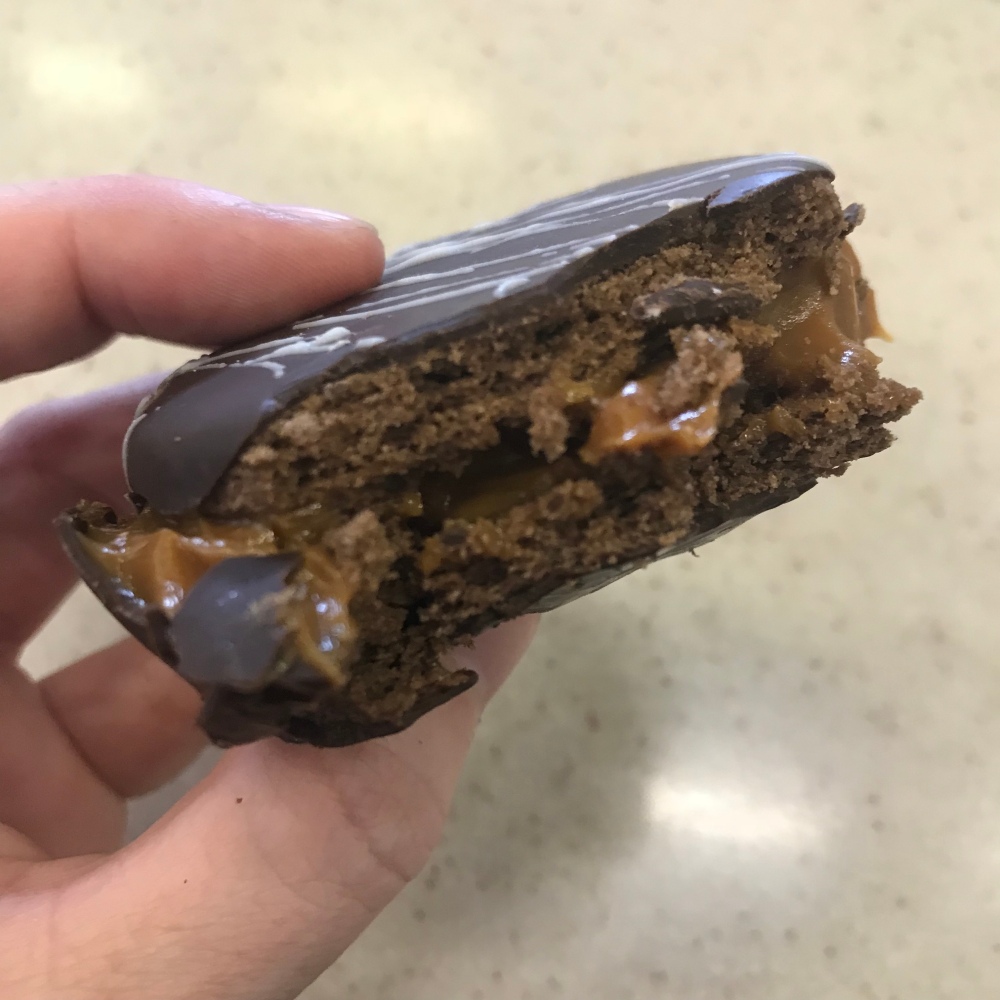 Whilst out  sightseeing we passed Punto Saludable which advertised ‘sin gluten’ in the window. I went in and stocked up on some cereal bars and some sweet berry muffins whilst Paul got a sandwich to go from next door! I had some gluten free snacks in my backpack but being away for five weeks I bought extra supplies every chance I got.

On a couple of days our lunch was a picnic in one of their amazing parks. We bought ham, cheese, salad type things and some bits from the gluten free aisles!

We actually travelled from Santiago onto the Atacama dessert where my gluten free experience was very different to that of Santiago. In hindsight I wished I’d stocked up more on bread/carb gluten free items when I had access to it in Santiago and highly recommend you do this if you travel onto Atacama.

We loved some of the local neighbourhoods in Santiago and thoroughly enjoyed the evenings sitting out with a drink – in my case several pisco sours!

By the bars in the evening we found little food stalls where meat skewers were being grilled. They looked like plain meat and it was the only thing on the grill, I used my translation card too but am always dubious how much street stalls will understand my needs but these looked safe as I watched the cooking process. I ate them on a couple of nights and wasn’t ill but you’ll have to decide whether you think they’re safe too!

Manjar, basically a thick caramel also known as Dulce de Leche in Argentina was a staple sweet treat of South America. I found this out from Bar Italia where I had manjar icecream as part of the dessert board and I found tubs of it in every size in supermarkets! Colun was the main brand that I found that labelled their products as gluten free, and along with manjar found all sorts of dairy products of theirs such as yoghurts and chocolate milk that became staples to my diet whilst in Chile!

I seemed to miss this recommendation on Kileys list which I’m now kicking myself for – from the sounds of it you should definitely try it in Santiago! I just googled it and it seems to be a fruit that can be made into dairy free icecream so definitely something to look out for!

Kiley also said in her email to me to try cherimoya juice, I don’t think I did so I will pass on her tip although we did buy several different fresh juices from stalls around Santiago as a perfect start to the hot summer days!

* Matildes – Recommended by @coeliacgirl_ldn on instagram, I had Matildes on the list. It looked like a great location but were fully booked when we tried to go, so don’t make the same mistake and book in advance!

* Kiley recommended Chipe Libre a cool restaurant with a focus on pisco and pisco cocktails with good food and Bocanariz, a wine bar next door that had interesting flights of wine to try both in the Lastarria neighbourhood. As Paul doesn’t like wine and I already had a winery trip on the list of things to do I thought I would be pushing my luck to go to a wine bar too – but I would loved to have had a chance to try this recommendation out!

* I spotted gluten free and vegan ice lolly options in the Costanera Center right near where you pay to go up the tower. 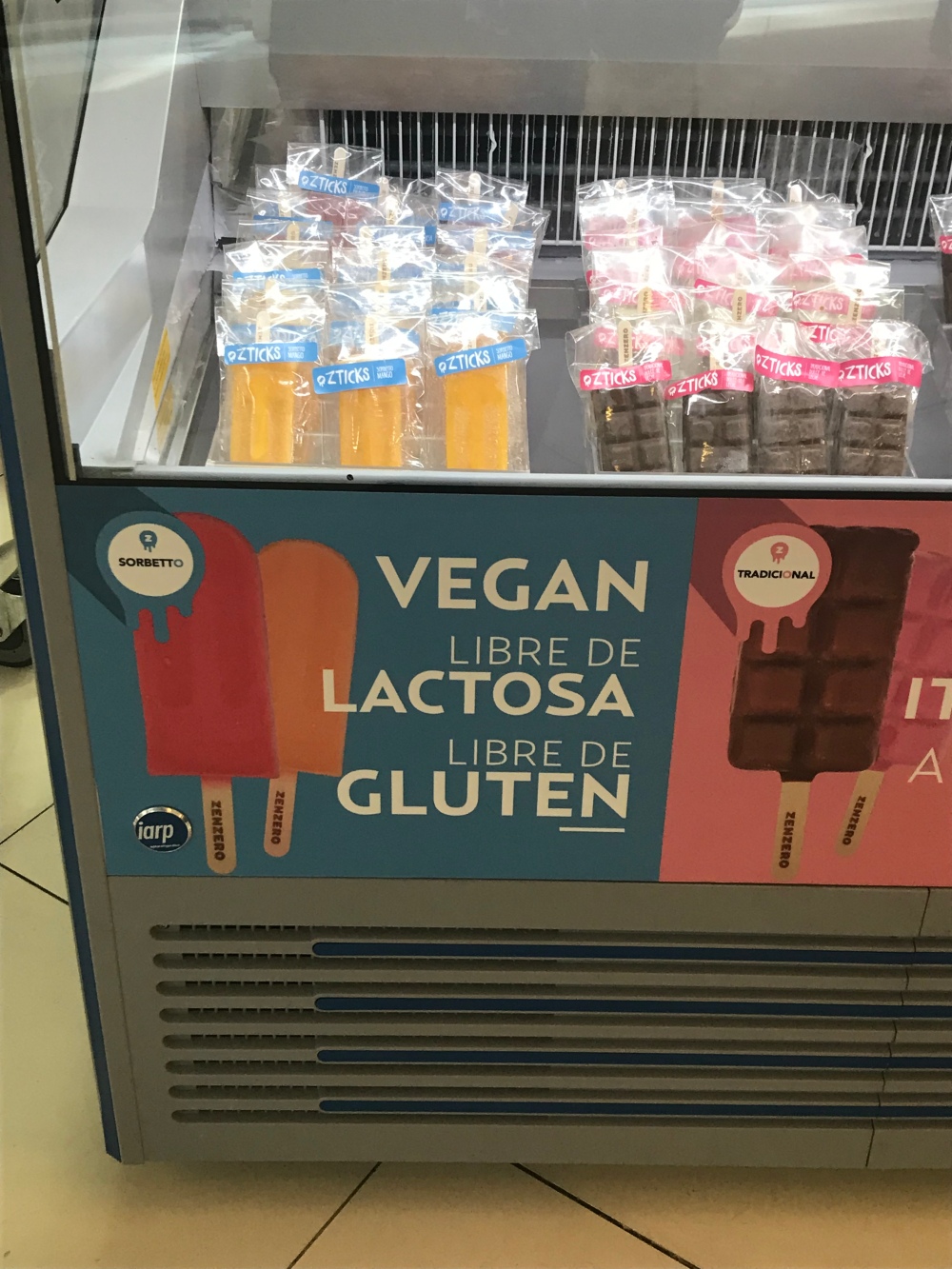 Tours and Sightseeing In Santiago

Going up San Cristobal Hill is a must do whilst in Santiago. The funicular was out of action (and had been for a couple of months!) so we had to get a bus up but the views from the top were breathtaking. We went up before sunset and sat up there for ages watching the sunset over Santiago and would highly recommend it.

However, a couple of things to note. We went on a beautifully clear day but many trip advisor reviews aren’t as good as my experience so perhaps keep an eye on the weather. Second note is regarding gluten! The traditional Chilean drink Mote con huesillo was seen in many locations, especially at the top of Cerro San Cristobal. Don’t be tempted by the icy cool peach drink (if the interesting appearance doesn’t put you off!) as they contain husked wheat. Everyone was drinking it at the top and would have been great to be able to try something so traditionally Chilean! 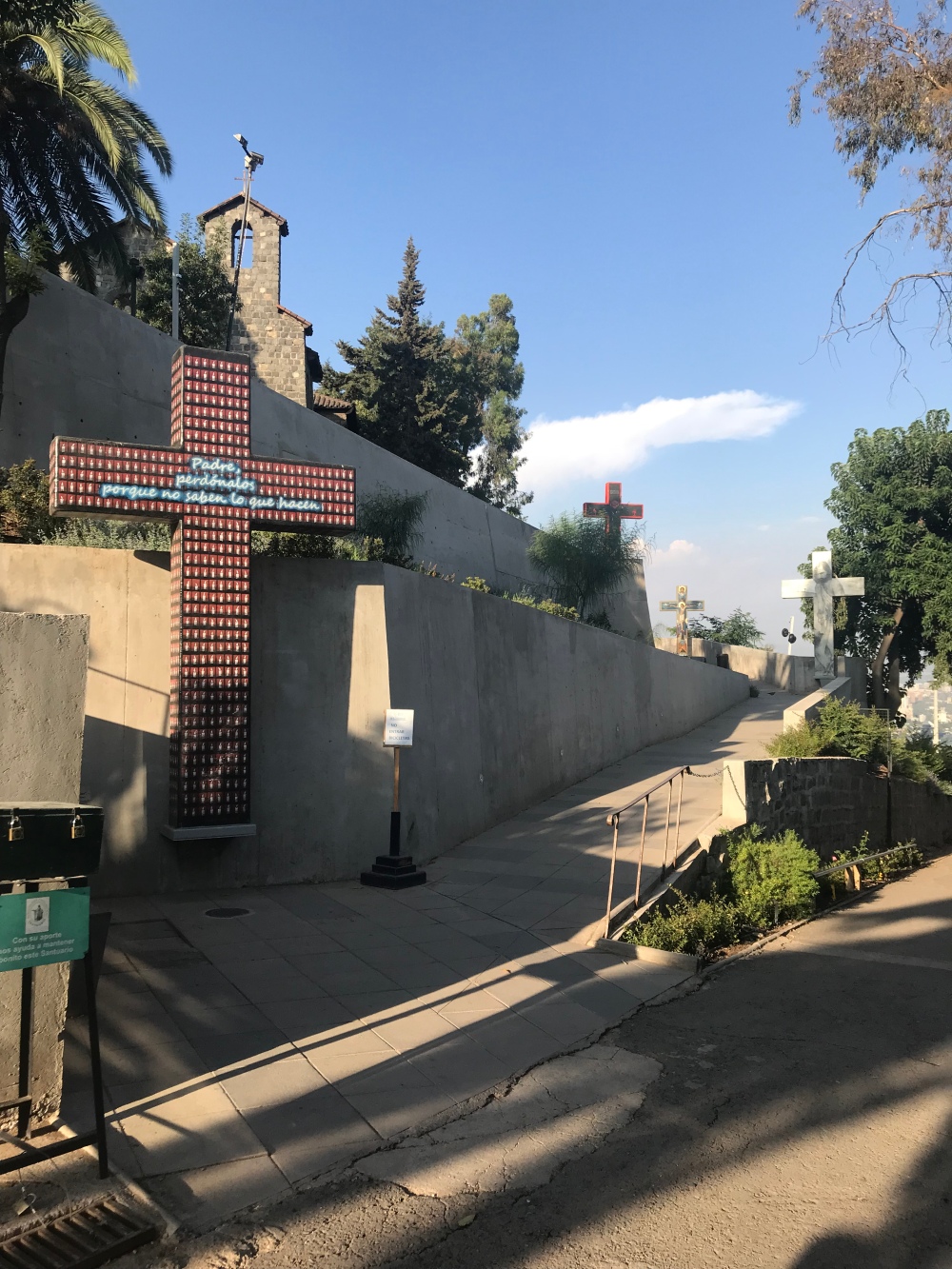 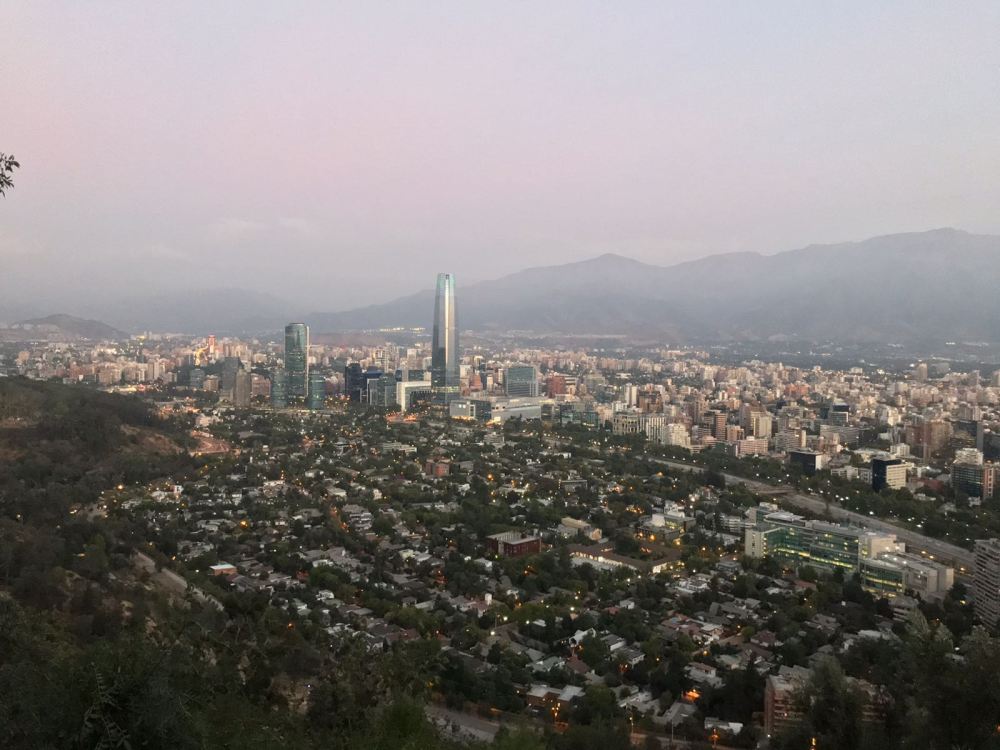 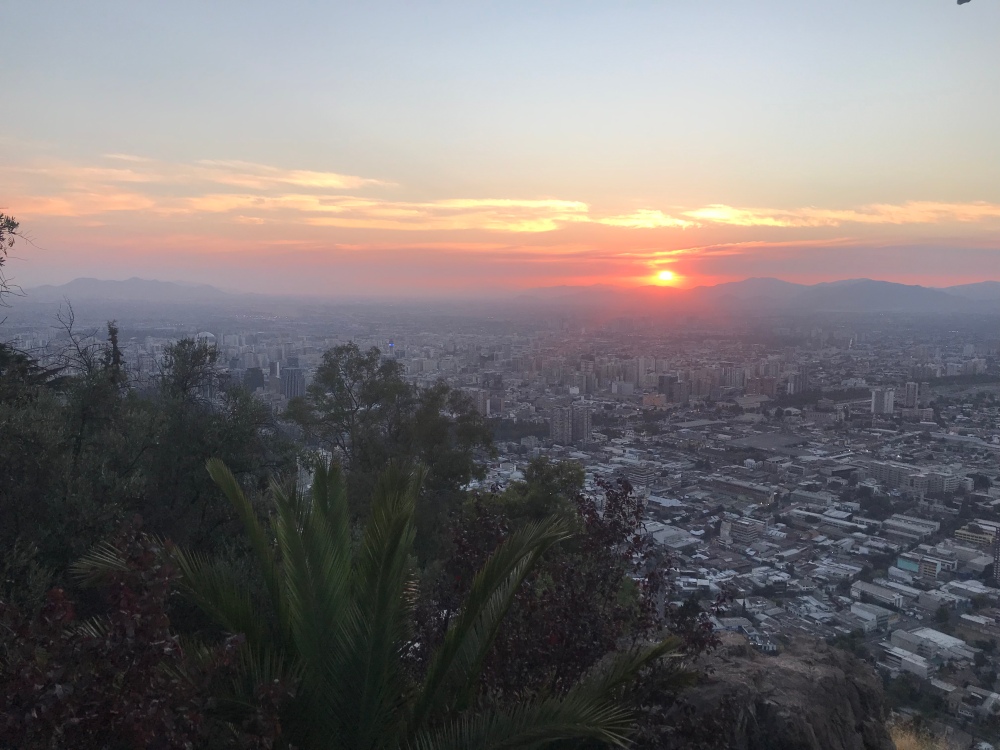 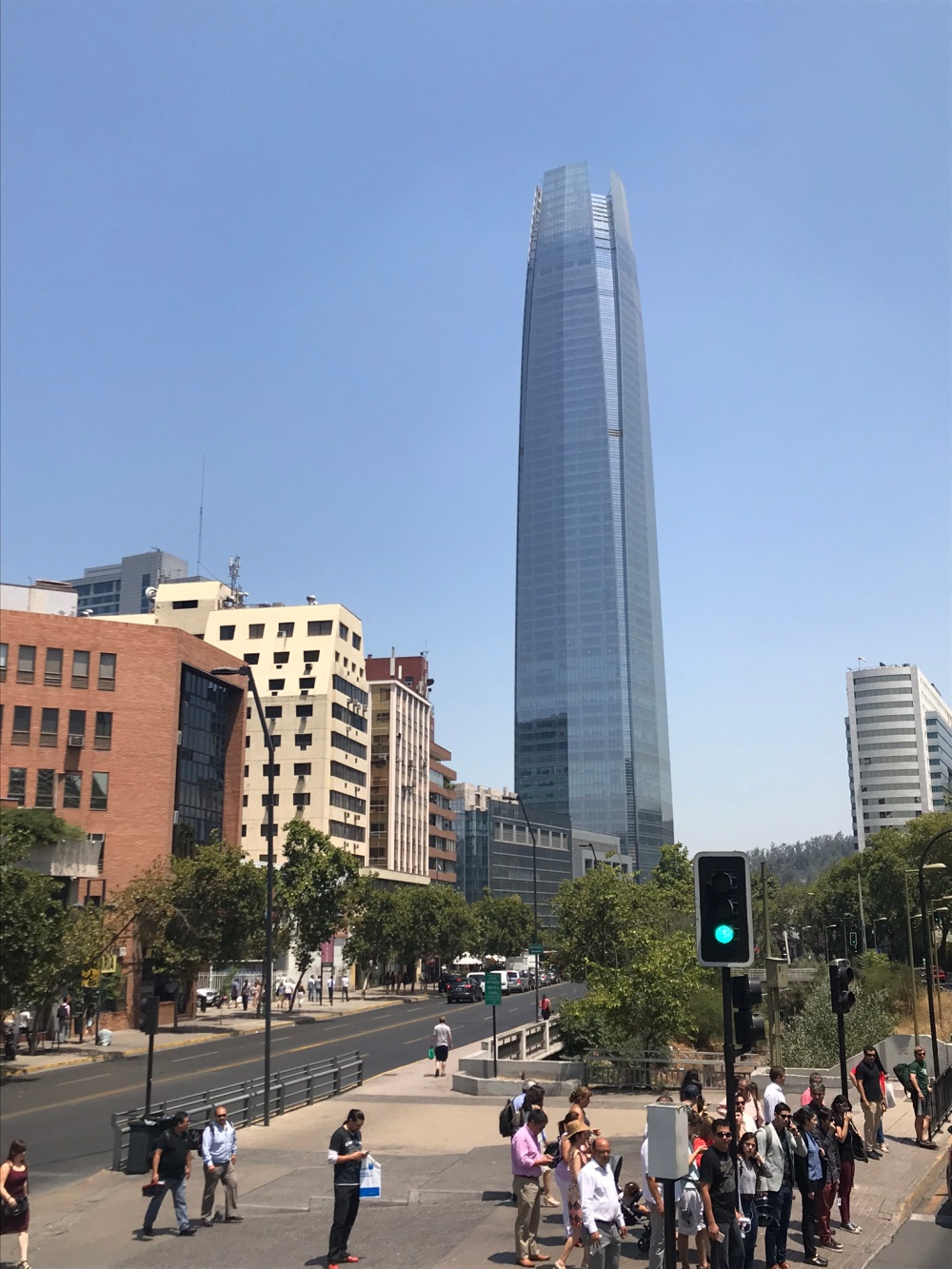 We went wine tasting that included cycling around the winery with samples at the end. 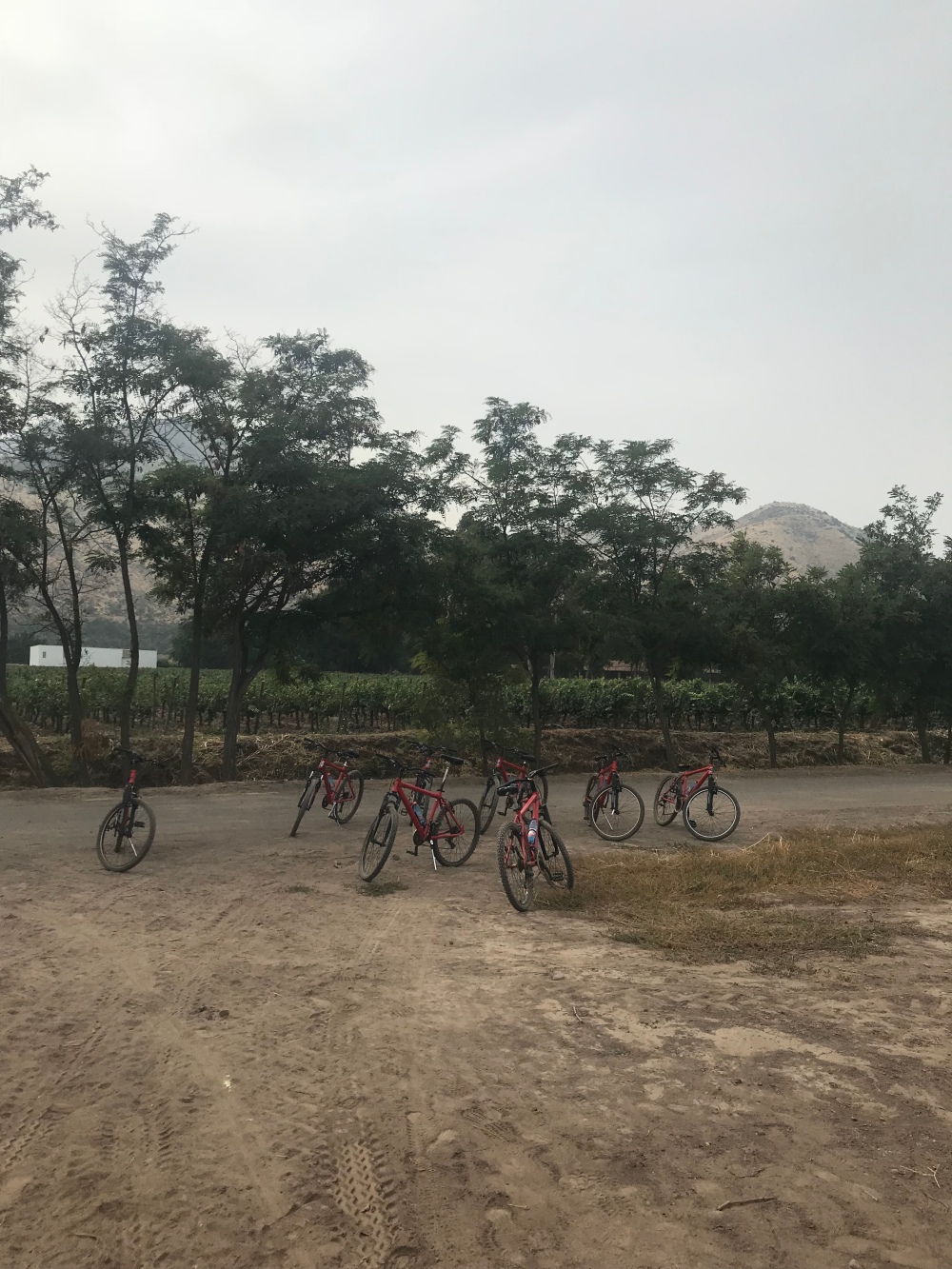 We absolutely loved Santiago and would urge you to visit if you ever go to South America, it was one of our favourite places during our trip and would love to return one day! If you get to visit then I am very jealous and hope you have the same incredible experience of the city as we did!

3 thoughts on “Gluten Free in Santiago – The Sightseeing Coeliac”